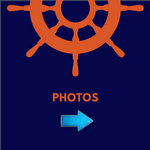 Perhaps the most significant development in bulk carrier design in recent years has been the introduction of double skinned bulk carriers. Attempts to make their introduction mandatory over a period of years were defeated at the Maritime Safety Committee of the IMO early in 2004 but the emergence of a practical well researched handy-max design from Carl Bro AS of Denmark in consultation with DNV for structural and regulatory matters and in collaboration with Graig Investments Ltd of Cardiff for the operational aspects has been welcomed.
The  “Diamond 53” &  “Sea Horse”  class of handy-max vessels has now been joined by the Diamond 34 class of handy-sized vessels smaller ships but with the same five hold configuration and many of the same features?.

The principal benefits of double skinned construction are that the second skin provides as
(a) additional line of defense against accidental water ingress, too frequently a cause of bulk carrier losses in the past ,
(b) holds can be discharged and cleaned more quickly because the sides are flush,  with all the steel frames, girders and brackets contained between the skins.
(c) ease access for inspection and repair to the entire side structure of the hold from within the double skin.

Disadvantage of the double skinned design are:
(a) the additional weight of structural steel required
(b) small reduction in space available for cargo both of which will reduce slightly the cargo quantity that can be carried,
(c) In addition it is feared by some that the great extent of double skin will prove exhausting to inspect and difficult to maintain.

The holds are provided with natural ventilation byway of openings in the hatch cover ends and with permanent lighting. The hatch covers are end folding, double skin and hydraulically operated. Below deck pipe ducts run alongside the hatchways, inboard of the wing tanks on port and starboard sides. These contain:
(a) wash-deck line,
(b) firefighting line,
(c) compressed air,
(d) CO2,
(e) electric cables, and,
(f) hatch hydraulic lines.
It seems likely that corrosion in all this pipework will be greatly reduced by these arrangements and that hydraulic leaks on deck will be almost eliminated.
Repairs when needed will be done below decks which will be an advantage in adverse weather.
Each pipe duct can be entered through three access hatches located on the main deck, one forward, one amidships and one aft.

Permanent hold lighting and water ingress detectors are of certified safe type, allowing the vessels to carry a large range of dangerous cargoes in all holds.
The hold lights are set in a recesses (εσοχές)  in the upper hoppers below the cross deck areas.
They are accessible only through manholes in the cross deck areas.
The water ingress detectors, are placed inside the aft bulkhead stool of each hold with their detecting tips in the hold They are of a type that detects moisture and are tested by the application of a damp (εμποτισμένο) cloth. Alarm panels are situated on the bridge and in the ship’s office.
The holds are provided with CO2 smothering with one delivery nozzle on each of the four sides of each coaming.
The delivery nozzles for the ballast hold / No.3 hold .are provided with a valve so that can be closed when the holds is ballasted.

Ballast water is carried in five pairs of double bottom tanks and five pairs of wing tanks which extend from the run of the bilge to main deck  level except in way of No.5 hold, where the upper part of each wing tank is a separate tank with a capacity of 300-400 mts for hold washing water. In addition there are the usual forepeak and after peak tanks.

Hold washing: The hold structures are entirely boxed in  the only departures from smooth surfaces being the forward and the after ladders and their platforms and double bottom air pipes within bulkhead corrugations. This makes hold washing a relatively quick and easy process. Washing is done using a portable combigun,  four (4) pipes run down the after bulkhead each hold within the corrugation that contains the Australian rules ladder.
(1) One carriers salt water  to wash the hold and to power the portable ejector (eductor).
(2) A second carries compressed air  to drive the combigun.
(3) Fresh rinsing water runs through the third, and,
(4) carriers the used washing  and ejector water from the hold to the collecting tanks abreast No,5 hold.
Each pipe ends in a coupling at a point near the tank-top.

Because the hold sides, deck heads and bulkheads are smooth a normal hold cleaning is expected to take no more than four (4) hours consisting of 1,5 hours sweeping up,  1,5 hours washing and 1 hour drying.

(a) dirtiness of the previous cargo,
(b) the volume of residues,
(c) the size of the hold, the resources available for cleaning,
(d) the standard of cleanliness required,  and
(e) the number and  experience of the seamen available.
A reasonable estimate is that it will take five (5) men one normal working day of 8 – 10 hours to clean one hold of handy-sized  or  Panamax bulk carrier to normal cargo ready standard from time of first entering the hold.
Six (6) men aboard a Cape-sized  vessel will require about the same amount of time per hold.
Cleaning to grain standard will typically take about 50% longer.
Cleaning of one hold of a two hold mini bulker and preparing for loading can normally be achieved by two or three men,  to a grain-ready standard, in 4 – 5 hours,  whilst a routine hold wash and rinse of the bilge wells can be completed in 1 – 2  hours.
On most ships it is only possible to wash one hold at a time though other tasks in an adjacent hold can be completed whilst the hold is being washed,  if sufficient labor is available.

The hold cleaning sequence is:

• Sweep up cargo residues perhaps using compressed air on ladders,  and remove them from hold.
• Lower the combigun, hoses and ejector  or  sump pump into the hold,
• Install the combigun in the hold and couple-up to the sea water and air deliveries.
• Install the ejector  or  sump pump in one bilge and couple it to the sea water delivery  (except in circumstances when there are no restrictions on pumping hold washings overboard and residues will not harm the bilge system,  in which case hold washings are removed through the bilge stripping system  unless owners company regulations prohibit this)  (Hold Washing Water tanks – No.5 wing tanks)
• List ship slightly towards the bilge with the ejector  or  sump pump.
• Wash hold including undersides of hatch panels and finishing with port and starboard bilges.
• Rinse hold using fresh water delivered by hydro-blaster with long lance (δορι-κονταρι)
• Unrig and remove combigun, hoses, ejector or sump pump and hydro-blaster.
• Pump bilges

The benefits of this system are:
• Washing is quick and easy because the ship’s side and bulkheads are free of obstructions.
• The hold washings, with residues, can be transferred to the Washing Water Tanks through dedicated pipes and need NO pass through the  ship’s bilge system.
• They can be retained aboard until discharge is permitted.
• No washing water need be put over side.

Permanent piping in the holds saves time rigging and unrigging the cleaning equipment. One inconvenient feature is that there is no easy route, such as trimming hatch,  by which to lower equipment into the hold  or  to remove equipment and sweepings from the hold when the hatches are closed and the cranes are stowed.
There are three routes for the disposal of the hold washing water:
1. When any residues in the water are not expected to cause difficulties in the bilge stripping system and when, in addition,  the ship is in a sea area where no restrictions apply  the hold washing water can be pumped out by a fixed eductor in the engine room via the bilge stripping system.
2. When those conditions are not satisfied the hold washing water is delivered by eductor via the permanent pipeline system to the washing water tanks which form the upper part of No.5 wing tanks and can hold about 700-800mts. There the water can be retained until the ship is in a sea area where no restrictions apply. The amount, of hold washing water used will depend in part upon the condition in which the holds are left by the stevedores but as little as possible will be used when it is to be retained aboard because the more washing water that is retained the less cargo can be lifted at the next loading port if a full deadweight cargo is to be loaded.
3. An alternative to an educator for removing water from the hold is air driven sump pump also connected to the washing water tanks through the pipeline.  A sump pump Is less efficient than an educator for the removal of washings containing cargo residues, and requires a lot of maintenance to keep it in good working order, but because is not powered by water the quantity of water sent to the holding tanks is considerably reduced. This is important when the tonnage in the holding tank will reduce the tonnage the ship can lift on her next voyage.
The hold washing water can, if relatively clean and residue-free,  be dropped from the hold washing water tanks into the No.5 wing tanks below.  Because the holds are easy to sweep clean the hold washing water usually contains little in the way of residues.  If the hold washing water is likely to leave residues in the No.5 wing tanks it can,  in sea areas where no restrictions apply,  be pumped directly into the sea by educator  or  sump pump.

Good design features:  Beside the uncluttered holds,  the pipelines within pipe ducts, the tanks for hold washing water, the fast filling ballast hold and the computerized ballast controls a number of smaller features contribute to the good design. They include well designed protecting brackets for the bottom sections of the hold ladders,  all air pipes positioned in  from the ship’s side  manhole lids protected with light covers flush with the deck and the quick,  easy and effective method of closing the access hatches to the ballast hold.