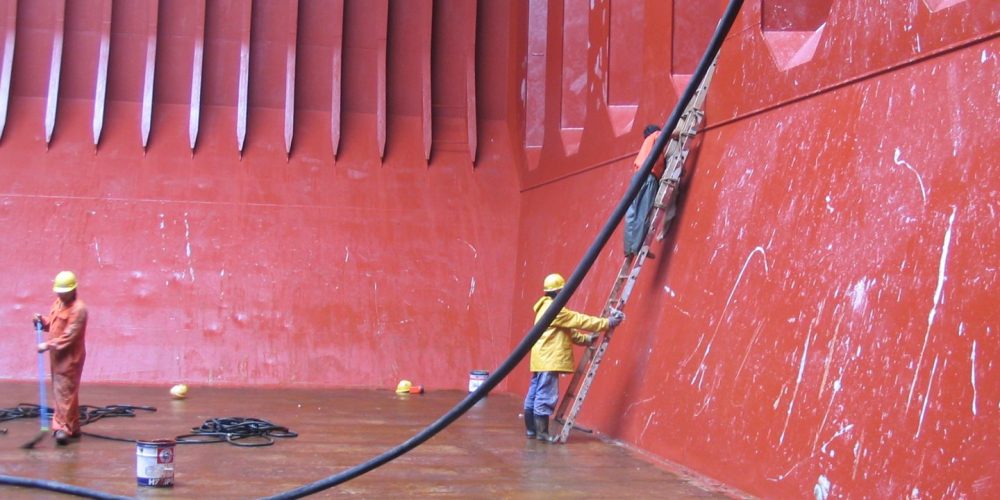 Removal of taint– by smell

Any extreme case of problems arising from smelly holds.
For example a bulk carrier was fixed to load grain in a US Golf port immediately after carrying a cargo of Fishmeal.
She was finally passed as load ready when inspected for the tenth time, and after (13) thirteen days of cleaning by crew assisted, in the later stages by shore labor and equipment important lessons learnt were as follows.
Cleaning and deodorizing chemicals designed for use with hot water were ineffective when applied with cold water.
The smell of fishmeal was only finally removed when the inside of the hold ventilator trunks, in Samson posts, were cleaned as thoroughly as the holds, and when every trace of fishmeal was removed from decks, deck scuppers, hatch covers and mast houses and when equipment from the mast houses had been moved to the poop.

Large amounts of fishmeal were removed from the boat deck drains, adjacent the accommodation ladder.
• Cleaning commenced with a shore gang using high pressure, high temperature water lasting with Zep Formula 4089, a chlorinated, highly alkaline cleaner followed by high temperature, high pressure water rinsing followed in turn by an application of Amine A, an ammonium based, concentrated disinfectant, deodorant and sanitizer. All waste water from this operation was pumped into a topside ballasting tank. The cleaning resulted in the removal of large amount of fish meal and debris from the king post / ,mast, ie, hold ventilation areas and significant further cleaning all surfaces in all holds. After each hold had dried it was given a final sweeping by the ship’s crew. The ship’s entire open deck surface, all mast houses and machinery flats were then sprayed with light coating of Anime A. All rubbish bins and all cleaning tool, were removed to the poop. Hold ventilator dampers and access doors were closed. The holds were found to be odour free but a slight residual smell was detected on the hatch covers so all holds were again rejected (8).
• The crew spent the day scrubbing the hatch covers. Solid and liquid residues from earlier washings were disposed of.
• No2 hold was passed but rest of the holds were failed for smell from the area of mast houses and coamings (9).
• The bottoms of the chain boxes located near the holds were scraped and cleaned and the mast house interiors were rewashed. All adjacent surfaces were sprayed with Amine A.

Finally the vessel was passed as suitable to load grain (10).